Coach DeMeo has also hosted a number of Chalk Talks in which he interviews other coaches about various Option Football related topics. The most recent of these featured one of the top Offensive Line Coaches in the country, Coach John Strollo. In his most recent appearance, Coach Strollo discussed the Tight End position with Coach DeMeo, and used both game and practice footage from his days at Penn State coaching a number of future NFL Tight Ends while on the Staff of Head Coach Bill O'Brien.

In Part 1 of Strollo's first appearance on Chalk Talk, the coaches discussed the merits of the Two Point Stance and Coach Strollo took us through 30 minutes of Offensive Line Technique Drills.  Part 1 concluded with Strollo using game video to explain the "C Gap Zone" play and critique his O Line's blocking. In Part II, Coach DeMeo continued his interview with the two focusing entirely on Offensive Line Fundamentals, Drills and Techniques. The entire Chalk Talk can be viewed in the Member video library by Option Central Members, and is available as well at CoachTube.com .

Coach DeMeo's Triple Gun material at Option Central includes over 85 Play of the Day Chalk Talks and over 16 hours of video recordings from a series of Webinars sponsored by Option Central. The webinar recordings are organized by topic and presented as "cutups" for easy and convenient viewing. Also included are Triple Gun Quarterback Drill videos - one that shows the actual teaching progression used by Coach DeMeo while conducting a Triple Gun 2 Day Camp for a first time Triple Gun team, and an Indoor Drills video in which Coach Tony DeMeo conducts a two day instructional clinic in a Wisconsin Indoor facility for a High School Quarterback. These videos are packed with Techniques, Fundamentals and Coaching points that can be applied to virtually any offense.

Our video library also includes material that can benefit Defensive coaches who want to better understand what their Offensive opponent is thinking and trying to do against them.  In addition to videos that "tackle" this subject directly, such as the Defending the Option videos described below, many of our Offensive oriented videos include Game Planning, Play Selection and "how to attack" discussions that center on the use of formations, motion and unbalanced sets to attack various Defenses. 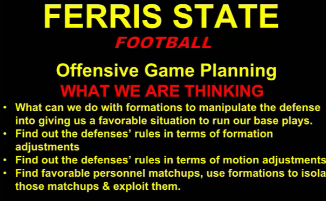 This Preview from the Ferris State Pistol Option Offense from the Inside Veer video illustrates the approach used by Offensive Coordinator Rob Zeitman to present information.  Video cutups of practice and game footage are used as teaching tools in this series of 15 videos that includes the Inside Veer, The Midline Veer, The Passing Game in the Short Pistol, Power and Jet Read plays, and many more 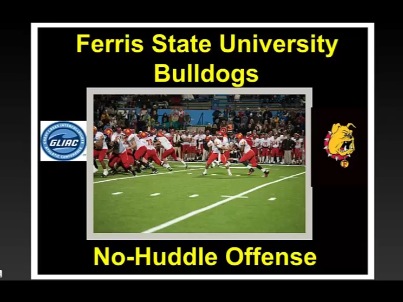 Clinic-style presentation videos from Tony DeMeo like this one introduce the Gun Triple along with the Triple Gun Pass Game.

Option Central includes a number of "classics", including Quarterback Drill videos like the one below that was produced by Coach Larry Beckish when he served on the staff of Lou Holtz at the University of Minnesota.

Other "classics" include the Option on Me video series and 3 other videos from Coach Jerry Campbell that cover the "under-center" Option game and complement Coach Campbell's written material.


This video trailer is from the video Installing the Midline Option.

The Option Central video library also includes bonus videos. Running Back Drills and Fundamentals is a video packed with timeless drills and techniques for coaching the Running Back position in any Offensive attack. Featuring Coach Jeff Nixon who is now the Running Backs coach with the NFL Carolina Panthers (Nixon's recent stints included Baylor, the Miami Dolphins, Philadelphia Eagles and the San Francisco 49ers), this video was produced while Jeff was at Shippensburg University, UT Chattanooga, and Temple University. Coach Nixon has used many of these same drills in the NFL, first with the Philadelphia Eagles and later with the Dolphins.

In this sample video taken from the first edition of Coach Nixon's Running Back Drills and Fundamentals video, Jeff introduces Agility and Ball Carrying drills with the help of John Kuhn, who was then a Shippensburg University Fullback . Kuhn played fullback in the NFL for the Pittsburgh Steelers, Green Bay Packers and New Orleans Saints.

In this second sample video from Coach Nixon - produced while he was the Running Backs coach at Temple University, Coach Nixon covers the Stance, Ball Security and Faking.