Play of the Day Chalk Talks Volume 86 and 87

We wrap up our series of Play of the Day Chalk Talks that showcases the comprehensive passing game of Tony DeMeo's Triple Gun Offense with a play that combines elements from the Drop Back and Quick Game in a single play.  In Volume #87, the play is a Slice/Corner combination in which the QB reads a Quick Pass to the boundary side and a Dropback to the field in the same play and in Volume #86, the play is a Fade/Stick combination on the Goal Line.   Both plays are available now in the Triple Gun section of our Video Library. 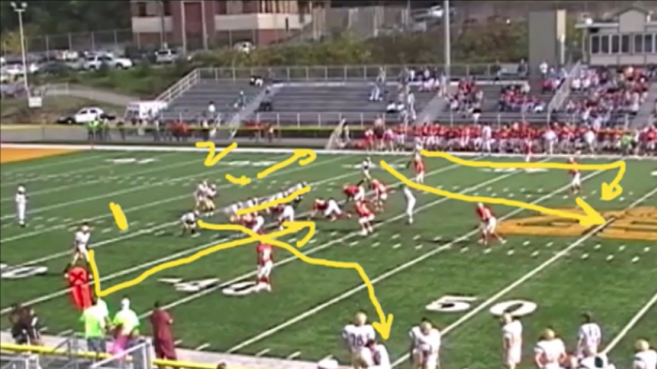 Two plays that illustrate the combination of Motion and Play Action in the Triple Gun Offense are the Gun Motion Fade and the Post/Wheel combination . In Play of the Day Chalk Talk #85, the Hitch converts to a Fade in response to a "squat corner". 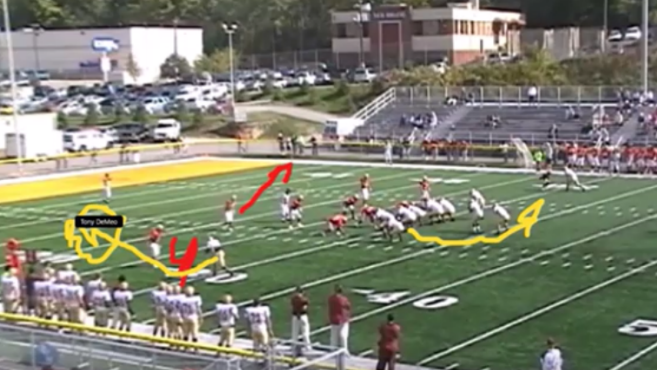 In the second Play of the Day Chalk that illustrates the combination of Motion and Play Action in an Option attack , Coach DeMeo explains a Post / Wheel combination that uses Whirley Motion to force a 4 Shell to 3 Shell rotation . Combined with Gun Triple Play Action, the result is a next to impossible coverage assignment for the LB assigned to run with the Wheel in this, 84th Volume of the Play of the Day Chalk Talk series. 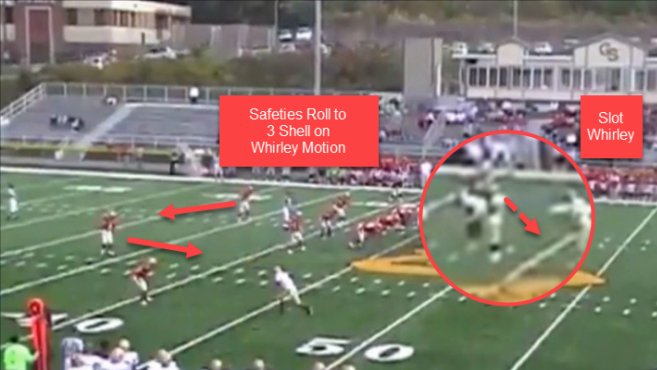 The combination of the Stretch and Slice routes from a 3 x 1 formation creates a no-win situation for the playside LB in Volume 83 of the Play of the Day Chalk Talk series.

"John Strollo is the smartest and best OL Coach in Football. That includes the NFL. He is WAY better than anyone from the top colleges in the country."
Jim McNally

In our Chalk Talk - Volume TT9, Host Tony DeMeo and highly regarded Offensive Line Coach, John Strollo, talk about the merits of the Two Point Stance before Coach Strollo takes us through 30 minutes of Offensive Line Technique Drills. The Chalk Talk concludes with Strollo showing game video as he explains the "C Gap Zone" play and critiques the blocking.

Triple Gun Half Reverse vs 4-4 Defense

Another new mini Chalk Talk from the Attacking the 4-4 Defense series is a Half Reverse vs a 4-4. The Half Reverse is a key Supplemental Run in the Triple Gun Offense, and what Coach DeMeo referse to as an "answer play", because it counters a pursuing overhang player in a 4-4 Defense.  This new video is included in Coach DeMeo's new CoachTube Course - Attacking the 4-4 Defense with the Triple Gun Offense and is available for viewing by Option Central Members in the Member Video Library.

The latest video from our Attacking Defenses series is a mini Chalk Talk in which a 2 TE set creates an open gap in an 8 man front and results in a big play. This new video, like the 4 before it, was made for Coach DeMeo's new CoachTube Course that is scheduled for release later this year.  It is available now for viewing by Option Central Members in the Member Video Library.

The third new video from our Attacking Defenses series is a 4 minute Chalk Talk that illustrates reading the outside backer while applying the "Hitch unless" thought process. The new video will be part of the fourth CoachTube Course from Tony DeMeo later this year.  Available now for viewing by Option Central Members in the Member Video Library.

Attacking the 4-4 Defense with the Triple Gun Offense

Coach Tony DeMeo kicked off his latest project - a series that focuses on attacking Defenses that will ultimately lead to a new series of  CoachTube Courses. Returning to the digital chalkboard for the first time in 2020, these two videos highlight the Gun Triple, because, as Coach DeMeo states.."it all starts with the Gun Triple".  Produced specifically for the first of three new courses that focuses on the 4-4, and in a style similar to Option Central's collection of Play of the Day Chalk Talks,  the videos below complement our more in-depth, Chalk Talks that also included a chalkboard-style illustration with Coach DeMeo explaining individual position assignments, blocking schemes and more.

In the first play, the Keep is the correct read..in the second, its the Pitch.

* In an additional play in the series the Give is the correct read. The third video is available now in our Member Video Library.

Option Central Contributor Tony DeMeo has published his second course on CoachTube.com. The Hitch: An Offense in itself, focuses on one of the "core parts" of The Triple Gun Offense. The Triple Gun Hitch, Fade, Seam and Boot passes along with the Hitch game are, without question, a powerful combination. That being said, The Triple Gun Hitch game can be a great addition to, and easy to incorporate into ANY OFFENSE !

The Hitch: An Offense in itself includes 3 plays that were first presented in Option Central's Play of the Day Chalk Talk format, and included in Volume III of Coach DeMeo's Triple Gun Virtual Playbook. Also included are five new plays produced in a similar fashion along with a "chalkboard" presentation - all produced specifically for this course, and a video from Coach DeMeo's Triple Gun Quarterback Drills DVD that shows him teaching The Hitch to High School Quarterbacks.

Check out this preview that explains the course content in detail and contains sample video from the course: .

Play of the Day Chalk Talk Volume 81 : The Hitch - a Triple Gun mini-clinic

The Hitch Mini-clinic includes a look at 5 variations of the "core pass" in the Triple Gun Offense to illustrate the concept of "strategic flexibility"  that is at the heart of the Triple Gun Philosophy. Available now in the Option Central Members Video Library, along with our entire 80+ strong collection of Play of the Day Chalk Talks. 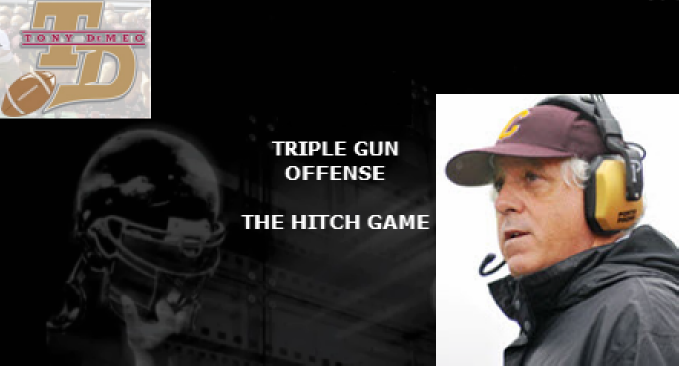 The last edition of our Option Central Newsletter included some great free material, including:

The Option Central Newsletter is available to both Members and Guests, and features one or more articles, videos and other resources on Option Football as limited-time "previews".

Not receiving Option Central News yet? Sign up now !